Skip to content
The demand for medical translation in the USA

The demand for medical translation in the USA

At the current stage, numerous US federal regulations, added to the Civil Rights Act of 1964, require that any organization receiving federal funds must provide interpretation from and into English as part of their services.

In 2000, Massachusetts lawmakers mandated that ICU hospitals and hospitals for people with mental health problems must provide interpreting services 24 ho

In fiscal 2012, health centers identified 133 native languages ​​among patients. From 2007 to 2012, there was an increase in the total number of recorded cases of the use of interpretation by 76.6%, and the number of in-demand medical translators increased by 73.3%. Most often, translation is required from Spanish, Portuguese and Vietnamese. The top three are followed by Arabic and Albanian.

In addition, special training is available through the Massachusetts Medical Translator Training Program, a regional program sponsored by the University of Massachusetts Medical School in collaboration with the Executive Committee of the US Department of Health and Human Services. This program has been preparing medical translators for 15 years.

But whichever of the offered courses the applicant chooses, before being accepted into the ranks of students, he must pass an exam in fluency in both English and foreign. 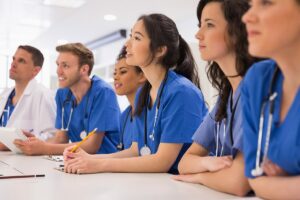 While college courses are designed to prepare students for low-responsibility work, the 50-60-hour courses in basic medical translation provided by translation agencies aim to create a staff of health care facilities that provide health care for Mass Health members. certain categories of people with low and middle income living in Massachusetts). Training from agencies includes training in anatomy, physiology, medical terminology in English and other languages. In addition to linguistic knowledge, students acquire other skills necessary in the framework of the work of a medical translator. After all, a good translator is known to translate everything said. Its role is not to listen and provide a summary, which non-professional translators usually do. Real experts convey the full speech as if it were a record of a person’s words, that is, without omitting any part of the message.

Take the example of St. Vincent Hospital in Indianapolis, Indiana. The Medical Interpreting Department consists of 3 full-time staff members and 15 translators at a daily rate that includes work at night and on weekends. Generally, medical interpretation is carried out in the hospital in the direct presence of an interpreter, however, a “teleconference” service is also possible if a suitable interpreter cannot be found in the surrounding area. In addition to this, the institution has contracts with translation agencies for rare translation services such as sign language translation. Among foreign-speaking patients, translation from Spanish is in the highest demand, followed by Vietnamese, third by Albanian, and fourth by Polish. As with many other healthcare facilities, the St. Vincent Hospital has an increasing need for interpretation.

In the United States of America, Massachusetts has the largest number of medical translators. The increase in the number of specialists is also observed in other states. According to experts, the growth of this indicator will not reach its peak even in the next 10 years.

Prev post Optimization of the translator's work
Next post Don't be afraid to go beyond translation! (interview with translator)